We picked our first lot yesterday, two lovely sticks which shall be cooked down for a rhubarb fool. Stop by tomorrow for the recipe and yummy pictures (without the cat). I’m a sucker for two things:

So when I saw that Graze were offering customers their first order of their snack boxes for free, I had to try it out.

You can find out more about Graze here – http://www.graze.com.
They make little boxes filled with healthy and not so healthy goodness – dried and fresh fruit, nuts, seeds, chocolate, crackers etc – designed for office workers trying to eat something a bit healthier during the day.

This is something I am trying to do more, rather than reaching for the biscuit tin. Having said that, this box didn’t actually make it to the office, it stayed at home where it was promptly eaten up!

My first box didn’t contain any fresh fruit due to a problem in their packing, but I did receive a nice selection of japanese rice crackers, ‘fire nuts’ (not a male affliction by the way), dried raspberries and chocolate buttons!

Unfortunately the chocolate buttons were not of the best quality chocolate and had that supermarket own brand of chocolate taste to them, so they were promptly baked into cookies where they became much better 🙂

The fire nuts were my favourite, mainly because they contined Wasabi Peanuts, which is something I wanted to try for a while.

Graze seem to love their voucher codes so its pretty hard to pay full price for a box, they were even kind enough to give me a code to pass on to others, so you can use this code for a free box: 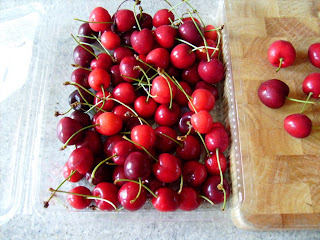 Well I did have a rather lovely start to the weekend. Where I work there are several small farmers, nurseries and vegetable growers so every now and again something fabulously seasonal, local and yummy comes up food wise.

There is a chap who sells Asparagus in early May, the nursery next door has a fabulous selection of weird and wonderful squashes in the autumn and there is talk of raspberries in the summer from someone else. 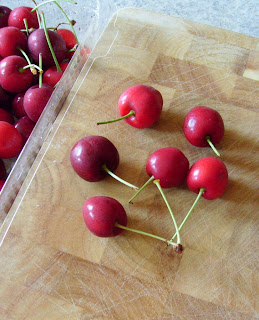 This month it is cherries. I think amongst all the talk of Wimbledon and strawberries, cherries do get rather lost. They are just as great when in season and fresh, local cherries aren’t a patch on the rubbery supermarket types.

Driving into work last Thursday I saw a great big sign for ‘CHERRIES – 2MILES’ – hurrahing slightly to myself, I came prepared on Friday with change and flat shoes, with my sights set on cherry pie.

I picked a generous 1/2 kilo of during my cherries (£2! bargain!) during my lunch hour and returned to work just in time for a cuppa and a biscuit before the desk job continued – the kind of lunchbreak I like.. 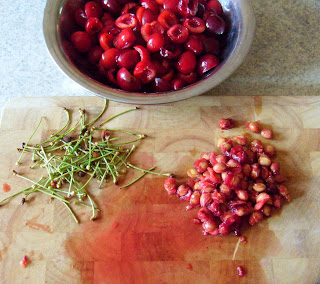 {stems on one side and pips arranged neatly on the other – weird?}

I found this recipe for Sweet Cherry Pie on my favourite food blog, Smitten Kitchen. I had a few pastry problems when preparing it, but we’ll gloss over that and I’ll show you this instead… 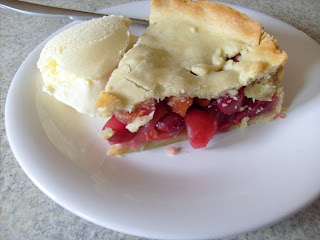 I’m going to go back at the end of the week with plans for a kind of black forest gateau. We also had cherries and pancakes on Saturday morning, which were fabulous, but I forgot to take a picture unfortunately for I am still a novice food blogger 😉 I’ve not yet blogged about pizza, I don’t think, and I should because everyone should try making pizza at home. Since making it myself we’ve never ordered a pizza again.

I use this Jamie Oliver recipe. The ‘00‘ flour is a must, it makes a perfect pizza which cooks quickly and comes out beautifully crisp. If you can find semolina flour then use this too, it makes it even better.

I don’t like to put too many toppings on my pizza because it really doesn’t need it.
This time I went for a combo, homemade pesto (another thing you won’t ever buy again once you’ve made it yourself) and tomato sauce with mozarella on top and lots and lots of black pepper. I attempted to make it a bit healthier with some salad too, I try to do my bit in between the cheese and the dough.

On Saturday we went for a probably very unauthentic sushi at Itsu in London. We love the conveyor belt thing, as gimmicky as it is. Still, the fish was very fresh and I had my first taste of raw scallop. I didn’t eat the flower by the way!