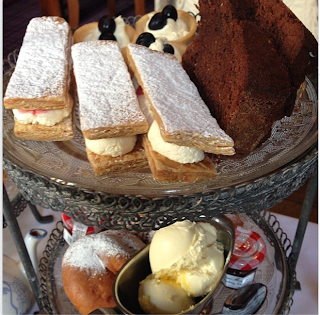 A few months ago I tried the Hotel du Vin afternoon tea during Miss Sue Flay’s afternoon tea etiquette workshop, it was on the whole very good indeed with the exception of some very lurid pink cupcakes which were very strange, given the rest of the selection. They invited me back to try their tea, after making some improvements, I went along a couple of weeks ago with two friends and unfortunately things haven’t improved.

I am all for being fair when I blog, and sometimes I think I can be overly positive – so as not nice as it is to write a bad review, we all have to do it. A blogger’s duty 😉

Between three of us we had a large tier – with sandwiches, scones, pastries and cake. There was a great selection of loose leaf tea, which was served in pretty blue and white floral teapots. They even provide a pot of hot water, something lots of tea rooms do not do – it is essential to prevent you drinking stewed cold tea.

The sandwiches were the same as before, and very good. Good quality smoked salmon and cream cheese, ham and cucumber. One of my tea companions was vegetarian, which she mentioned beforehand, so they included a separate plate of veggie sandwiches – a nice thought, I can’t remember what they all were but I know it wasn’t all cheese!

Next up were the scones, which were quite disappointing. Last time I had afternoon tea there we were treated to tall fluffy scones, just as they should be. This time around they were very flat indeed, chewy and obviously overcooked. Such a shame, the scones are the centrepiece of an afternoon tea, and it should always be the element that is perfect.

We moved on to the mille feuille – the pastry was nice but not too sweet, and the cream was just cream, not sweetened. There was a little jam/coulis but not enough to taste. Next to that were some fresh fruit tarts with cream pattiserie – the tarts had obviously been filled a little while ago – and the cream had made them soft. Soft soggy pastry, which was also undercooked (they also seemed liked they were bought in, and they are often paler than homecooked) so it was all a bit disappointing. The blueberries were fresh though!

The last offering was a sort of chocolatey nut cake, it wasn’t very rich in chocolate and each was cut at very strange and slightly jagged angles, a little shabby for an elegant afternoon tea. The cake itself wasn’t dry but the flavour was a little miscellaneous.

I really liked the afternoon tea last time around, so I am really not sure what happened this time. I’m quite disappointed. The library, where tea is served, is gorgeous, very cosy in the Winter, and it is a great central location. They have an excellent opportunity here and it will be sad if their afternoon tea offering becomes the same as the rest of those offered in central Cambridge – badly thought out and only appealing to the tourist crowd. Maybe I’ll just pop in for a cuppa next time.

Do any of my readers have any great central Cambridge recommendations for afternoon tea? I’d love to hear them, between conversations with other bloggers we have slightly drawn a blank.