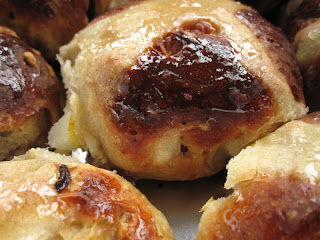 Homemade hot cross buns are one of the best things you’ll make and are nothing like the flabby supermarket ones. I shouldn’t have left it so long until I made them again, the last time I baked them was 4 Easters ago.

I watched the Great British Bake Off Easter Masterclass a few days before the Easter weekend and because I am very easily influenced I decided that I absolutely had to revisit them and bake them over the long weekend. 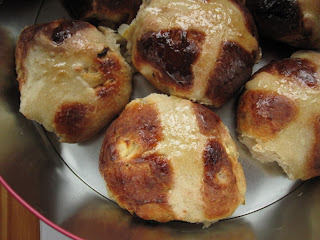 Incidentally, I was going to name this blog post “Paul Hollywood’s Buns” and I wondered if this would drive lots of traffic to my blog, but I couldn’t do it. I don’t get the Paul Hollywood thing, is he a dish? Maybe I am a little young to see it (ha). Anyway back to the buns, hot cross ones. 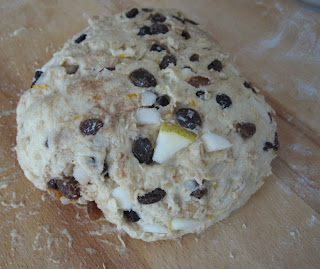 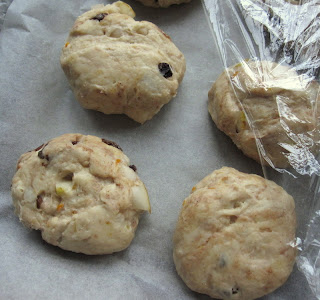 Yes it is not Easter anymore, but I made these over the Easter weekend and they were lovely, so I decided to tell you about them. And you know, it is ok to make them after Easter, Jesus won’t be mad. And it might make a nice change from the mounds chocolate eggs you have in your kitchen. 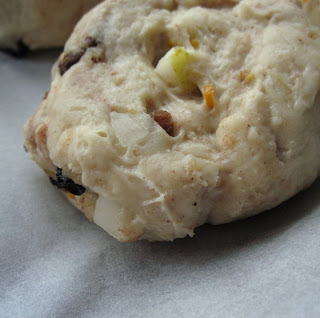 A few notes on the recipe, I used only mixed fruit instead of mixed peel & sultanas, I had a pear so I used that instead of an apple – both worked fine. I think the fruit would benefit from being soaked before baking, maybe in some tea, to stop it blackening whilst baking, and for a little more juiciness.
Also, I used honey thinned with a bit of water instead of apricot jam, to glaze, which worked a treat.

Extra flour and water for piping crosses
1tbsp of honey, for glazing

1. Boil the milk and then leave to cool until lukewarm
2. Mix flour, sugar, salt, yeast (keep salt and yeast apart on different sides of the bowl, so as not to kill the yeast), egg and softened cubed butter in a bowl. Slowly add cooled milk, mixing at first with a fork and then your hands to form a soft and sticky dough
3. Add orange zest, pear/apple, mixed fruit and cinnamon. Knead for about 5 minutes to form a soft springy dough.
4. Leave the dough in a warm place, to prove, in an oiled bowl covered with oiled cling film, for one hour, til doubled in size.
5. When proved place the dough back onto a lightly floured surface and divide into 12 even pieces. Transfer to a baking tray lined with greaseproof paper. Cover again with oiled cling film and and leave to prove for another hour. The buns can be close together as it is ok if they stick together during baking.
6. Heat oven to 225c / Gas mark 7.
7. For the crosses, put 5 tablespoons of flour in a bowl and then slowly add cold water to form a thick paste. Put into a piping bag with a narrow nozzle (I used a wider one and it came out a bit more like a splodge!) and pipe crosses on to the buns when they are proved.
8. Bake for 20 -25 minutes til golden brown and sound hollow when tapped. Glaze with honey when they come out of the oven and leave to cool.

I learnt a good tip from Paul Hollywood on his Bread programme, bread should be left to cool when it is finished baking, so that the inside cooks with the residual heat – something which explains the doughy insides I have been suffering with! I did this with the hot cross buns, for as long as I could, and they came out perfect inside.

Enjoy spread with butter and a large cup of tea. 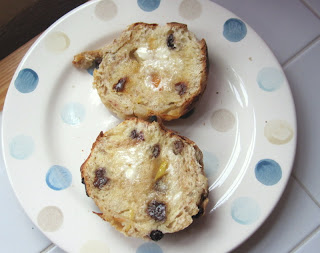