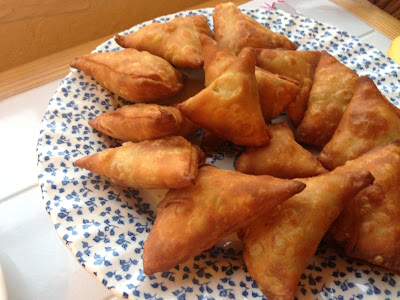 Crispy, delicately spiced samosas made from scratch, read on for my recipe for authentic Gujarati samosas – pastry and filling. END_OF_DOCUMENT_TOKEN_TO_BE_REPLACED 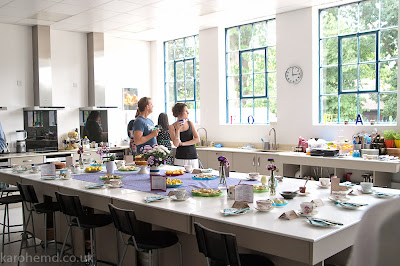 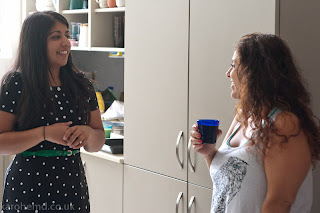 My venue was the fabulous Cambridge Cookery School – which was a dream to cook in – especially being as my kitchen is the size of a postage stamp. There were 5 ovens, or maybe 6! I lost count. I had a lot of fun prepping in there. I had the help of Miss Sue Flay, Cambridge’s afternoon tea expert extraordinaire – her experience was much appreciated!

My guests arrived and I greeted them with a refreshing glass of Mango Lassi. My lassi was spiced with cumin – based on the traditional Gujarati dessert of ‘Rus’ – which is mango puree sprinkled with cumin and salt, eaten like a cold soup. Mango Lassi often comes with just a little salt, or fennel, the cumin was a nice change – and very nostalgic for me! My mango lassi recipe is here. My afternoon tea consisted of two savouries, three sweets and two cakes. As you would traditionally start with finger sandwiches my guests dove into the savouries first. 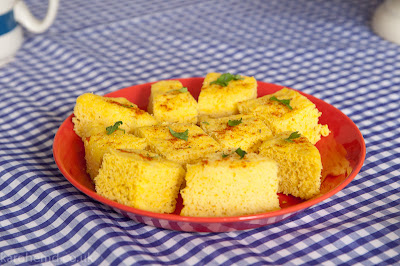 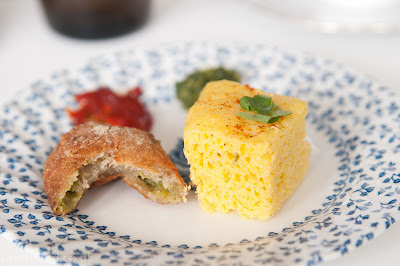 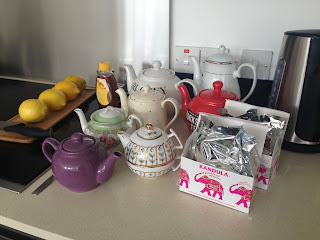 Whilst everyone worked their way through savouries I made two big pans of masala chai with Kandula English Breakfast Tea and a sprinkling of Jacob’s Jam’s Chai Masala. Masala chai is made by bringing water, sugar, masala and loose tea to the boil then adding milk and bringing to the boil once again. If my guests wondered why I was staring so intently at it, it is because it can boil over in seconds if you take your eye off it – a watched pot does boil, full recipe here.

Onto the sweets – again as is traditional for afternoon tea – they made up the majority of my offering for the day. I really wanted to include some mithai on my menu, as they are integral to sweets in Indian culture – served during all celebrations – weddings, births, Diwali and when welcoming important guests.

My personal favourite mithai is ladoo – made up of tiny deep fried sugar balls which are then formed into large rounds and spiced with cardamom and decorated with pistachio nuts. These are something of a challenge to make, so they didn’t make it on to my menu – but if you see them anywhere – buy them! 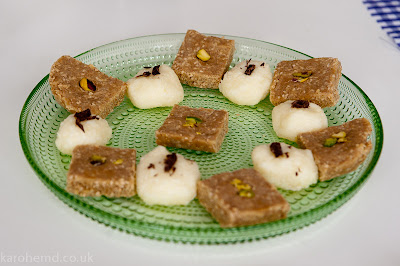 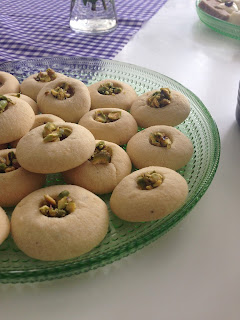 Crumbly and lightly spiced Nankhatai biscuits are ideal with a cup of tea, and they were a hit with my guests. Thumbprint cookies remind me of Nankhatai – although the Indian biscuits are filled with nuts or sometimes spices. Mine had pistachio on top, and for a few brave types – cumin seeds. 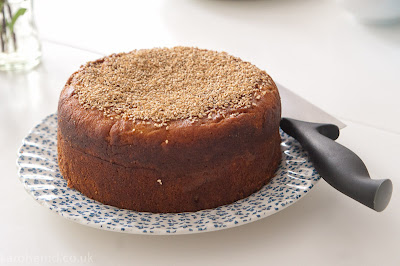 What is afternoon tea without cake? First up was my Honey Sesame Dream Cake – not a based on a traditional Indian recipe but the flavours are quite Indian! I made a double batch for an extra tall cake. 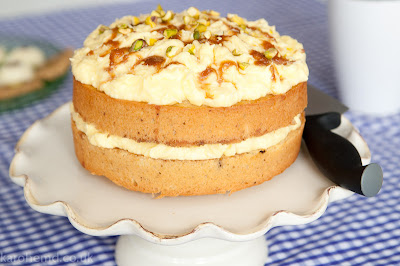 My centrepiece was a Masala Chai Cake which had three components – a light sponge which was then soaked in spiced tea syrup before being sandwiched with cream cheese buttercream with a final flourish of syrup and some pistachios. My cake icing skills need a little work, I have to admit, but I was happy with the flavours. I’m planning on making that tea syrup again, but putting it into a cocktail instead! 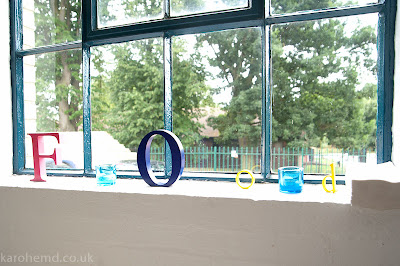 Putting on a food event is such hard work, I’m used to organising conferences as part of my day job, but food is something else! I spent the whole weekend prepping plus all the planning before, list making, shopping, recipe collecting – but it was so FUN. I learnt lots, and some new techniques – a lot of the food I’d eaten before but never cooked before so it was a steep learning curve. 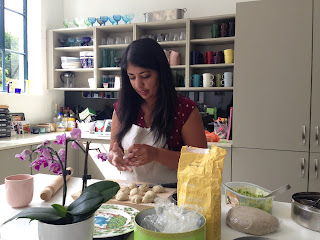 The majority of the pictures in this post were taken by Ozzy – thank you for capturing my event so perfectly. 🙂

Thanks so much to all who came to my tea – particular thanks to Tine at the Cookery School for the venue, Miss Sue Flay for being a fabulous assistant, Gemma at The Linton Kitchen for lending me her gorgeous china and my lovely husband for being my sous chef/assistant/calmer downer.

I’m doing this all again soon! Next is a supperclub which will be a 3 course Gujarati (vegetarian) feast. I’m still working out a date so stand by your inboxes (sign up to get emails here) or follow me on Twitter for tickets. Soon! 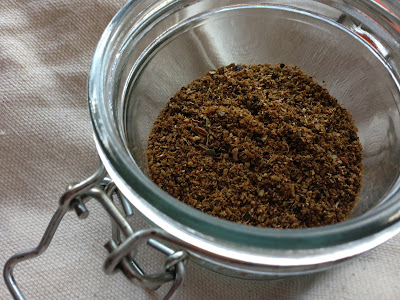 I’ve always bought Garam Masala, sometimes from an Indian grocer but more often than not from the supermarket, which I have now learnt is not a patch on making your own.

Googling for recipes I’ve learnt that everyone, and I mean everyone makes theirs differently. I think it depends on what you prefer, spice wise. Some add cinnamon or turmeric, I preferred to leave these out – cumin, coriander and cardamom are the flavours I really wanted to stand out in my masala.

Ideally you need a grinder, I have an attachment for my blender which grinds spices. Some also use a coffee grinder, but do bear in mind if you use it for spices it isn’t wise to use it again for coffee – it will have to be your spice grinder from then on. If you have neither then a pestle & mortar will work, but will obviously take longer.

It’s very simple, just add all your spices to the grinder and give it a whizz until it is a fine powder. Decant into an airtight jar – jam jar or kilner jar is perfect, and store in a cool, dark place. 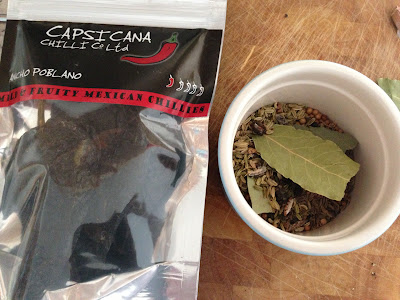 My garam masala has a little twist – local chilli purveyor, Ben of Capiscana Chilli Co. recently tweeted that he’d made his own mix using one of his dried Mexican chillies; I was very intrigued and with Ben’s gift of a parcel of Ancho Poblano and Pasilla Chillies I decided to make my own masala. I used about 1 inch piece of each dried chilli (seeds included) and whizzed it up with the other spices. 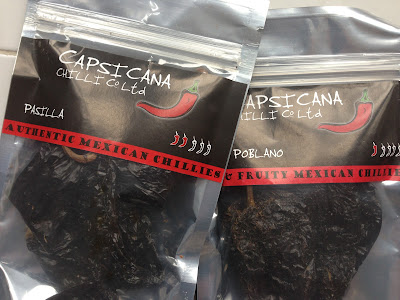 Garam Masala
Makes about 70g of masala.
Easily doubled/tripled, but don’t make too much, fresh masala is better masala.

2 teaspoons of coriander seed
2 teaspoons of cumin seed
1 teaspoon black peppercorns
3 bay leaves
6 cardamom pods – use the black seeds inside only
4 cloves
1 inch piece of poblano chilli, chopped
1 inch piece of pasilla chilli, chopped
The addition of the Mexican dried chillies gave a great kick to the masala as well as a nice fruitiness and smokiness. I’ve already added some of it to recipes I’m cooking for my Indian Afternoon Tea and it is 100 x better than any garam masala I’ve bought before.
Try it out, it’s easy! 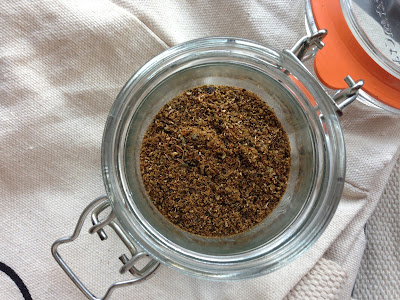 Thank you Ben for sending me the chillies! 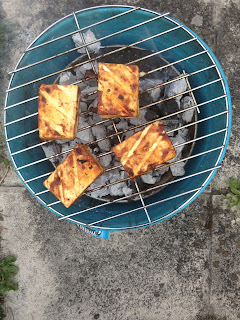 This is barely a recipe, because it is so very easy, but more of an idea really. Paneer is great on the barbecue, and just because it is an Indian cheese doesn’t mean you have to put Indian flavours with it – chiptotle works a treat. I prefer using paneer to halloumi, it is less melty and won’t stick to your barbecue grill.

When shopping for some very important meringue nests, to make Eton Mess during the Wimbledon match (We’re having a very stereotypical English summers day here…), I spotted Wahaca sauces were on offer in Waitrose, £1 a bottle.

I cut up the paneer in to four chunky pieces and then coated them in the sauce, about 1/4 of the bottle. It only sat for about 10 minutes before going on the barbecue, but this was fine. If you brush over the marinade during cooking it will boost the flavours. We barbecued the paneer for about 3-4 minutes on each side til crispy and charred. Folded up in a flatbread with some salad, it was perfect vegetarian barbecue food. 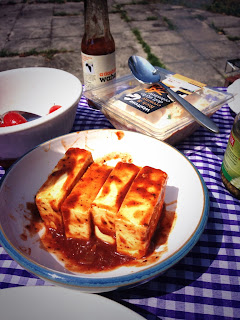 You could make your own marinade – maybe with some ketchup, oil, balsamic and chipotle in adobo. But when you are pressed for time (the Wimbledon final was an hour away) the Wahaca sauces are great – really smoky with a nice heat and richness from cocoa. I’m going back to buy the other two sauces in the range!

On a related note, I contributed to a Local Secrets article by fellow Cambridge blogger, Heidi Sladen – read more about my barbecue tips for veggies here. It’s not all about dry soya burgers and vegetarian sausages! 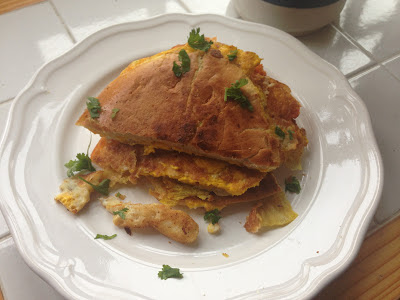 Definitely the winner for best name ever for a dish. Helen (Food Stories) blogged about this recently and it quickly became something loads of people on my Twitter stream were cooking up for themselves. I’ve never heard of it before but it seems to be made in several places in Mumbai. It’s a mixture of soft fluffy eggs and crispy bread fried up spices and lots of chilli.

You break eggs into a pan of very hot oil, add spices then lay two halves of a white bread roll on top, add more spices and then begin a lot of squishing and flipping to get a crispy, eggy spicy flat pancake sort of thing.

It’s a super easy breakfast or lunch and you’ll probably have all the stuff in your kitchen already. Do it!
Helen also says it is a perfect hangover cure, but I’ve not had a hangover to test that out on, but I can see how it is.

Find the recipe here (and watch the video).