Yesterday I went to the 2nd Clandestine Cake Club for Cambridge held at the fantastic Greens Coffee Co. in Cambourne. You really have to love cake to go to one of these, and fortunately I do. Everyone brings a cake along and then you spend the evening drinking tea and eating your away around all the sugary offerings. There we over 20 cakes this time and every one looked amazing. I didn’t try all of them but I managed 4 slices whilst I was there and took some home – much to Mr Giraffe’s delight. My offering was a Banana and Oat Cake with Elderflower Cream Cheese icing. The cake was originally meant to be vanilla sponge but it came out of the oven dense and flat, and my buttercream failed too. Luckily I’d also made banana bread so I jazzed that up with the icing (made at work the next day, before the club!) which worked really well. The evening is organised by Miss Sue Flay of tea party fame. I’m really looking forward to the next one.
There are lots of Clandestine Cake Clubs being held by other people around the country – check the website to see if there is one in your town.

The banana loaf recipe started off wanting to be the one from the Hummingbird Bakery book but I edited it so much it pretty much is a different recipe now. I subbed out a lot of the sugar, used less flour and added oats.

Whisk the eggs and sugar together until well combined. Then add in the mashed bananas and mix well again. Fold in the dry ingredients carefully, and then pour in the melted butter and fold again. Pour into the prepared loaf tin. Bake for 35 – 45 minutes until cooked through.

I really struggle with buttercream, it tends to split very easily for me. I love cream cheese icing because it is just as decadent but so so much easier to make. This recipe is based on the Jamie Oliver recipe that goes with his carrot cake.

Mix all the ingredients together in a bowl and then spread all over your (cooled) cake. All I can say really is YAY. The Chelsea Bun is back, and also a whole host of other goodies. I’m so pleased Fitzbillies is back and improved, and also it is a proper bakery where everything is made there, and made properly. We’ve already had a chelsea bun each but we visited again at the weekend. I had a perfect hot chocolate (made from ganache made in their kitchen) and a wonderful coffee choux bun. Mr Giraffe had a cheese chelsea bun which is simply an excellent twist on the classic sugary treat – topped with cheese and filled with more cheese, leeks and mustard. The tea is also very good here, proper loose leaf served in a pot. We’ll be back for the coffee and also for lunches.

The re-opening of Fitzbillies really makes it feel like Cambridge is edging towards being a decent place to eat.

I’ve been doing some good eating lately (whilst trying to lose a bit of weight, hmmmm, not working), so I thought I’d condense some of the yummy things into one post. First off, lovely greengages in my garden. The wasps are eating most of them but we managed to save a few, a recipe coming up soon for Plum Crumble Bars. Have any of you been watching The Good Cook? I’m sure I’ve seen Simon Hopkinson before but I can’t remember where, and wikipedia doesn’t jog my memory, but that is beside the point! I have really been enjoying the programme, the filming is interesting – sometimes over the top – and the recipes are really really good. I made the aubergine feta and parsley recipe over the weekend and it was fantastic. Sure to please veggies and meat eaters. Next on my list is the baked parpadelle, cheese and onion pie and the piedmontese peppers. Next up, broccoli pesto. I like pestoing (I made a new word!) things. Asparagus, peas, broad beans, and of course basil. In my attempts to be healthier I tried out the Double Broccoli Quinoa recipe on 101 cookbooks for lunches this week. The pesto is nice, a little more woody than other vegetables – I think a handful of sweet frozen peas would help here. Although I also skipped the cream to be healthier, which is probably what it needs. Last Saturday I asked Twitter where to go for a decent  coffee and a slice of cake in Cambridge, The lovely Miss Sue Flay suggested Jocalatte on Burleigh Street. I was not disappointed! Lovely fresh homemade cakes, great coffee and in a beautiful vintage style tea room setting. I’ll be going again. They also do little homemade chocolates and cute cupcakes.

I think that is my foodie round up done, a new recipe featuring greengages coming tomorrow 🙂

I think Cambridge maybe in danger of becoming a good place to find good food. Slowly, very slowly new places are opening up which are inventive, yummy and good value. The opening of The Hole in the Wall Cambridge by Masterchef finalist Alex Rushmer has been much anticipated by foodies in Cambridge, especially me!

We went along for Sunday lunch on the most beautiful sunny day. The pub is set in a very pretty Cambridgeshire village, lots of cute cottages, well-kept gardens and scenic countryside.
The pub itself is also very nice-  a 16th century building with beams and low ceilings. Inside it still has quite a pub feel, I don’t think a great deal has been done to the decor since they moved in, maybe something they are working on? Some of the fixtures are a little dated and the carpet is the extremely 1970s, but it doesn’t really matter once you start reading the menu. The menu comprises of 3 starters, 3 mains and much to my glee FOUR puddings. This is a good start. Often so many restaurants stick a couple of puds on, ice cream and cheese. Ice cream is not pudding! Vegetarians are catered for here too, only one dish on the starters and mains but both were fantastic and well thought out. 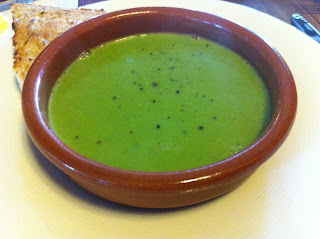 For starters I had the pea & ham soup which came with toasted brown bread. It was sweet and fresh with lovely smokey pieces of ham in the soup, I could have done with a bit more bread though, only one small piece for a large bowl of soup. My husband had the tomato and mozzarella salad which combined at least 4 different kinds of tomatoes in an olive oil and basil dressing with creamy mozzarella. The green tomatoes were my favourite, crisp on the outside and very soft in the middle, perfect. For main I had the confit duck with pork cassoulet and very creamy mash. The duck was done to perfection, fall off the bone and the cassoulet had huge chunks of slow cooked pork inside. My only complaint would be that it was quite under seasoned, though salt and pepper were provided. The vegetarian main which my husband had was really really well thought out. The peppers had been pre roasted til smokey and soft then stuffed with cous cous studded with aubergine, courgette and deep fried cheese, yes deep fried. It was then covered with goats cheese and cooked til bubbly. The choice of puds was, as already mentioned, excellent. On the menu was a honeycomb cheesecake (my choice), lemon tart with blackberry sorbet, mirabelle plum charlotte and chocolate peppermint pots. My cheesecake was fluffy and rich at the same time, with a gingery based and a creamy top with chunks of honeycomb inside and on top. 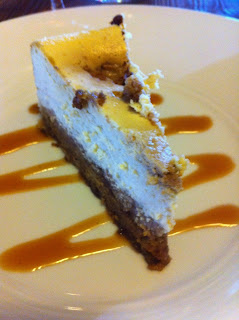 My husband had the plum charlotte, we’d previously had the excellent apple charlotte at Le Gavroche so it had a lot to live up to. Whilst it wasn’t as good as Le Gav it was brilliant, the bread was so crispy and the inside very soft and full of plummy goodness.

We will definitely be going again soon, the food was excellent and the menu varied. The service was a little shakey but they’ve only been open for 2 weeks. I think now is an excellent time to go because so much seasonal produce is on show. 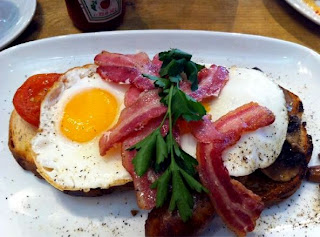 I find it very hard to think of a good place for breakfast in Cambridge, and upon asking other people it would seem that no one else really knows either. You can pop along to the Black Cat cafe for some french toast, or maybe Giraffe for one of their breakfasts but nowhere really sticks out as being amazing.

Bill’s Restaurant and Store opened last week, at the site of the old (and not very good) Slug and Lettuce pub. The first thing that really drew me in was the breakfasts, it has a good selection of traditional ‘fry up’, french toast, eggs benedict/florentine/royale and some interesting inclusions like bubble & squeak and grill vine tomatoes with basil on toast.

As the name suggests you can also shop here, they sell jams and marmalades, fancy French lemonade, pasta, chocolate, beer, the list is endless. Everything is arranged in shelves around the tables so you can shop whilst you eat. 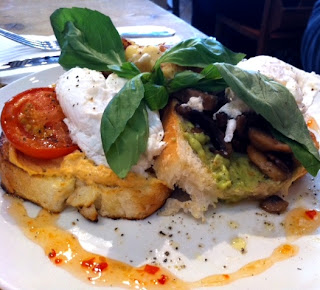 I ordered the Bill’s breakfast which was two fried eggs on sourdough toast with bacon, sausage, mushrooms and grilled tomatoes. Mr had the veggie breakfast which was really well put together, poached eggs on toast spread with houmous and guacamole, tomatoes, mushrooms and sweet chilli. He also tried the bubble and squeak which the real star, crispy on the outside and pillowy soft inside with a good kick of mustard. 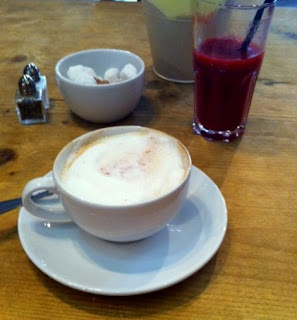 The coffee here is also excellent, as are the freshly made smoothies.

We arrived at about 11 and the restaurant was quite busy, it is obviously very popular already, only a few days after opening. The food seems very fresh with attention to detail.

It is a small chain and in a place full of chains I can be wary but Bill’s does have personality. I’m looking forward to coming back, mainly to give the puddings a go, which look very naughty!

Update: We’ve been back a few times since 2011 to Bill’s and I’m afraid to report that the quality has gone down a lot. Portions seem to be smaller, food blander and greasier. It’s disappointing and I don’t think just a blip. If anyone else has given it a try lately do let me know if it has improved.