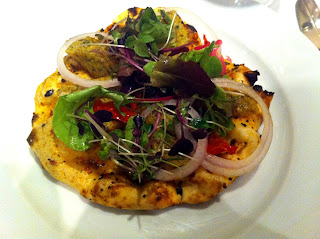 I think I’ve lost count of the amount of times I’ve seen Atul Kochar on Saturday Kitchen and said ‘oh I really want to go to Benares.’ Finally last weekend we made it there for our 3rd wedding anniversary. We booked it way back in late August so I’ve been looking back and forth at the menu for weeks and the anticipation was great. 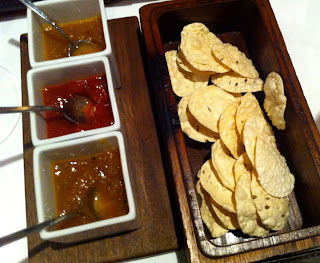 We started with little poppadoms with three chutneys – pineapple, tomato (my favourite) and mango & ginger, they were a good introduction to the style of spicing used at Benares, all very well selected, not too hot but with enough to leave you with a slight chilli warmth when you’ve finished eating. 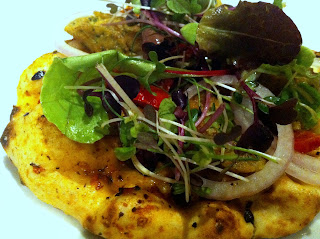 My started was the ‘Mumbai Pizza’ – I guess they were trying to be lighthearted with the name but I think it didn’t really sell the dish very well! It was tandoori fish kebab (made with the catch of the day which was Hake) on a sundried tomato naan with micro leaves, lovely pink pickled onion and black olives. The olives worked really well, surprisingly so, especially when you added some of the coriander chutney the dish came with. I would have preferred my naan to be a little crispier, the dish had plenty of oil which didn’t make it taste oily but it did make the naan a little softer, but not soggy.

Mr had the roasted autumn vegetable pastries with plum chutney, I of course snuck a taste and they were lovely, possibly a little forgettable but I was concentrating on my starter instead! 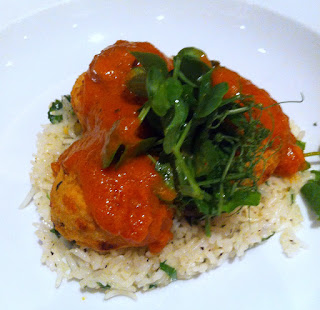 For main Mr had the cottage cheese and apricot koftas, which came with herb rice and a tomato and fenugreek sauce, I loved these, a really innovative vegetarian main and despite neither of us being that crazy about cottage cheese or apricots, we both thought they were great! 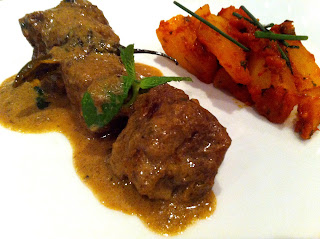 My main was braised lamb neck fillet with masala turnips and a green peppercorn sauce. The lamb was as I’d hoped, super tender and the spices ran all the way through it. I could have broken into the kitchen and taken home a whole pan of it. Something I definitely want to recreate at home. As part of our mains we also got some tandoori bread, onion rice and gorgeous red dahl – all lovely and a nice touch to have something to share on the table which is so much a part of Indian food. 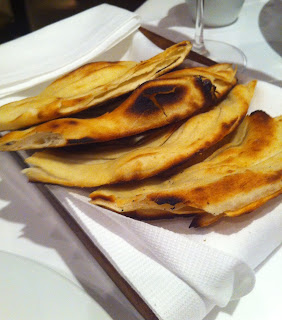 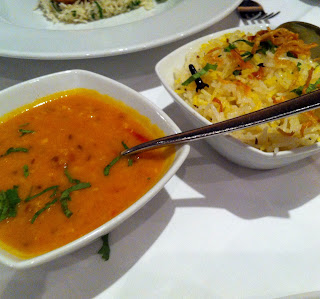 I’d also ordered some Bhel Puri, which is one of my favourite things to eat, but unfortunately it didn’t actually turn up and both of us didn’t actually realise this til we were half way through our mains so we didn’t ask for it. We probably should have done, but given the quality of the restaurant you’d have hoped they would have remembered! Bit of a shame. 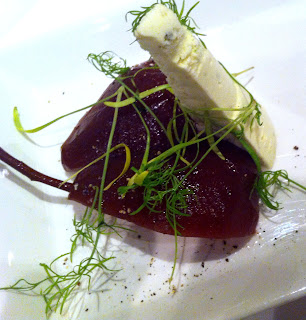 Desserts were chocolate mousse (Mr’s) which was encased in a chocolate globe with raspberries both fresh and dried with extra chocolate sauce and orange. Mine was spiced poached pear with vanilla custard and some excellent pistachio kulfi. Both beautiful and just the right amount of spicing again without being over the top. 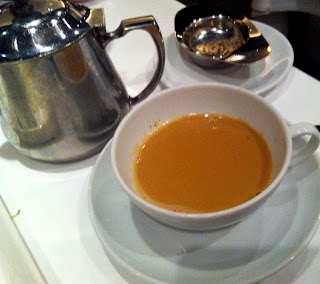 We also ordered tea – a light darjeeling tea for Mr and some masala chai for me, and happily we also received some perfect petit fours – possibly not entirely sticking to the Indian them but they were excellent – cinnamon shortbread (which were a lot like Nankhatai), peanut butter filled chocolate domes and raspberry rice crispie squares. Loved the fun element of the rice crispie squares, the raspberry flavour was really fresh and vivid. 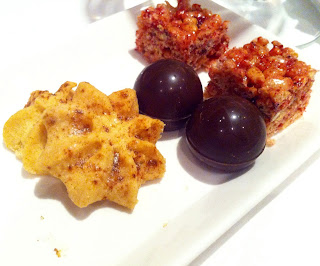 The tea menu was extensive, with 6 darjeeling teas alone, many of which are exclusive to Benares. The masala chai was made traditionally, although with honey not sugar, and everyone knows masala chai needs to have plenty of sugar, but luckily I’d been provided with a little bowl of it – I guess they know too!

Overall the meal was fantastic and memorable, really interesting food which uses traditional recipes and techniques but gives them a bit of a modern / western twist. The service was a little slow at times – they forgot one of our dishes and we had to wait a while for the bill, so something to improve upon given they have a Michelin star.