Baked oatmeal is the answer for anyone who is just terrible at eating breakfast in a calm, prepared fashion. I rarely eat a proper breakfast in the weekdays, I admit it, I prefer to sleep a bit longer. Anything I can grab on the way out works for me, and I do admit that sometimes a chocolate bar or a piece of cake does the job. But I have been better lately and a banana or a nakd bar comes in their place. 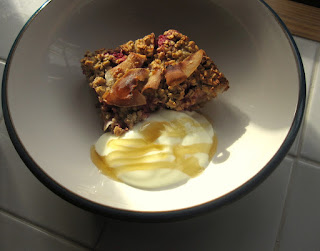 I tried Baked Oatmeal recently after reading about Allie’s recipe for it. I had previously made Heidi Swanson’s baked oatmeal which was also great, although more of a pudding because it does have a fair bit of sugar and butter in it. Allie’s recipe is healthier and therefore much more acceptable for breakfast. I made this first with raspberries and shaved coconut, and again with just coconut, I added a big squidge of honey the second time because it wasn’t quite sweet enough for me the first.

Baked Oatmeal, from Allie in Londonland

1 ripe banana
1 egg
1 1/4 cups of non dairy milk – I used Kara coconut milk
2 cups of porridge oats
1 punnet of raspberries (about 200g)
About 2 tablespoons of shaved coconut plus extra for the top.

Preheat the oven to 190c.
Mush up the banana in a large bowl with a fork, then beat in the egg and then the milk. Fold in the oats and then your choice of fruit/other things.
Bake for 30 minutes, or until firm in the centre.
Cut in to squares when it is still slightly warm, eat! 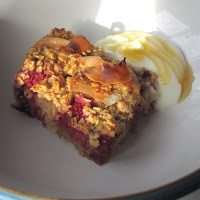 When I get up early enough to eat breakfast from a bowl, I’ve been having it with yoghurt and any extra fruit I have, and with a drizzle of honey. The best thing is that you can wrap in in foil and store it in the freezer – and then just take one out the night before and grab it before work. 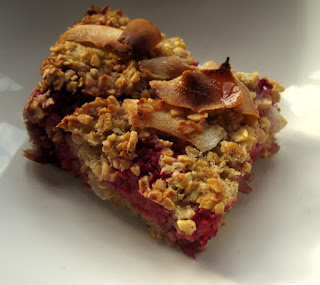