I crave things often and suddenly, but normally they go away fairly quickly to be replaced by another craving. Sometimes I crave something for days and this is when I have to make it at all costs.

This time it was sticky toffee pudding. I’ve never made it myself before but it was only going to be a matter of time. I searched around and found this recipe by David Lebowitz and also this version of his recipe on Ginger Tablet which was happily in grams rather than cups too. This is just the kind of food you need when the roads are covered in ice and the house just won’t heat up, it really does feel like it sticks to your ribs (and your arteries).

Sticky Toffee Pudding – adapted from David Lebowitz & Ginger Tablet
I roughly halved the Ginger Tablet recipe, made a couple of variations and we got four very generous helpings.

for the toffee sauce:

Put your chopped dates in a bowl and cover with boiling water. Leave for about 10-15 minutes whilst you make the cake mixture and sauce.

For toffee sauce add all the ingredients to a non stick saucepan and bring to the boil, stirring all the time so it doesn’t boil away. After about 5 minutes take off the heat. I added a bit of cream towards the end as the recipe said this would help the sauce to remain thin, it still thickened anyway! Reheating it will bring it back to sauce stage later on.

Line a loaf tin with well buttered greaseproof paper (both sides) – add half of the toffee sauce to the bottom of the loaf in.

Cream butter and sugar in a bowl.Add egg, then vanilla then your syrup. Sift in flour & baking soda slowly and mix in carefully. Add in milk and mix. Then drain your dates and add to the cake mixture, mixing carefully, take care not to overmix.
Then add your cake mixture to the loaf tin, on top of the toffee sauce.
The layer of toffee sauce really makes this pud stand out!

Bake for 20 -25 minutes at Gas mark 4 (I think 180c?). My oven is old and decripid and so took a lot longer but anyone with a normal oven should have this ready in less time.

Reheat the rest of the sauce on the hob when the cake is done, slice cake, pour on sauce, add ice cream/cream/custard, die of pleasure.

Any remaining sauce will keep in the fridge for a couple of days, but if you use it all up the first sitting (don’t blame you!) its fairly easy to make a small batch with the same recipe above. 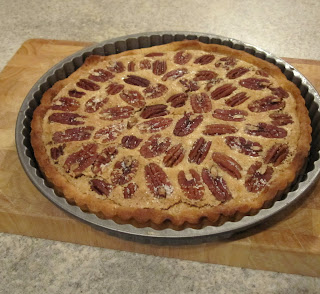 I’ve never had much luck with pastry. My shells always shrunk or drooped in or didn’t cook enough or cooked too much. My pies and tarts sometimes tasted ok but they never looked neat and tidy.

I usually blamed it on my oven, its not the best and it has trouble keeping the right temperature.

But I think I just didn’t have the right recipe… or the right equipment. Yes I was guilty of trying to make a tart case with just a normal shallow cake tin.

I was almost about to give up and make a pastry case with a ready made shop bought shell (I know, shocking!) but I couldn’t bring myself to buy it. Instead I bought myself a proper tart case and found this recipe for the great unshrinkable tart shell. 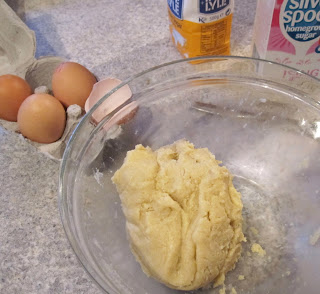 It was indeed a great recipe, not too much hassle, the only thing you need is patience whilst the pastry cools in the fridge and freezes in the freezer. It did shrink a tiny bit but it didnt slump or flop and it stayed in shape to give a lovely pecan pie. 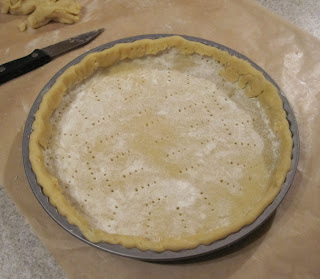 I follow A LOT of food blogs on my google reader, but strangely none of them came up with a recipe for pecan pie – is it such a given that everyone should know how to make pecan pie?
I tweeted it and the lovely Alice of Snapdragonbeads gave me her Mum’s authentic pecan pie recipe – (four large eggs, 2/3 cup sugar, 1/2 cup crushed pecans, drop of sherry or bourbon mixed in, I also added cinamonn and a dash of maple syrup).

Whipped it up and poured it into my tart case, baked it for 15 minutes and voila!

Gorgeous! The pastry turned out so well, crisp and sweet and cooked properly all the way round.

(as you can see I also sprinkled it with caster sugar before baking, it didnt really caramelise but it does taste nice! I would suggest using icing sugar or not bothering!). 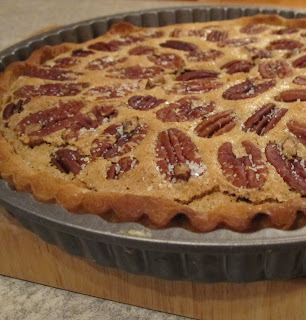 Watch this space for more tart recipes now that I have found the perfect tart shell! 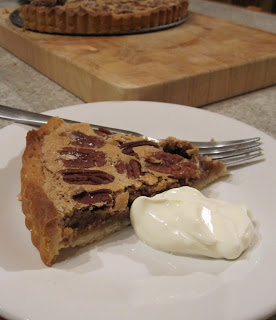 Now that autumn is coming to an end I am pleased to be able to spend a Sunday afternoon cooking a roast dinner, and then come home on a Monday evening to a big bowl of stew and dumplings. 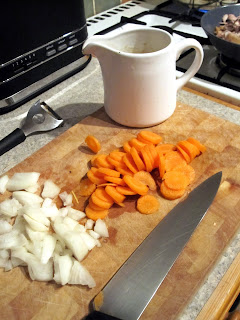 This is a very easy and adaptable recipe but you do need a the remnants of a roast chicken to help you along – this is where the flavour is. The day before I’d made the Zuni Cafe roast chicken recipe with the usual trimmings and most importantly a lovely gravy from the roasting tray.

We had lots of chicken leftover and also lots of gravy, the chicken was stuffed with thyme so there was lots and lots of flavour there. also the Zuni Cafe method (which is extremely popular, as you will see when you google it) ensures a chicken that is roasted with perfectly crisp skin and incredibly moist and tender meat – the latter very important for a stew.

Firstly I should apologise for the pictures, my new camera is doing a good job in artificial light but chicken stew is hard to make photogenic! 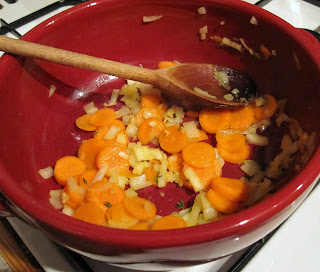 Finely dice the carrot and onion and fry with olive oil in a casserole dish (or ovenproof dish with a lid) until the onions are nice and soft. Add the garlic and cook for a minute or so.
Add in the chicken and then the gravy and the stock – make sure the chicken is well covered.
Season and add a sprig or two of thyme – use less if you had a lot of herbs in the chicken when you originally roasted it.

Bring to the boil and then put in a medium oven with the lid on, cook for 20 minutes whilst you make the dumplings.

I’ve never really been a fan of dumplings, I always thought of them as being stodgy and cloying – this recipe is much different. It doesn’t use a lot of flour and no suet – instead milk and cream are used to make light and fluffy dumplings with an almost mashed potato like quality. It is adapted from this recipe on Bread and Honey. 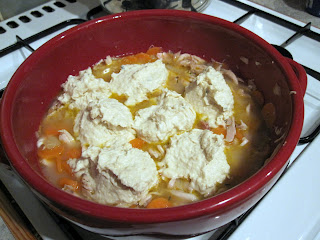 Mix dry ingredients and herbs together and then slowly add in the cream and then the milk. You aren’t aiming for a dough but a wet mixture that keeps its shape – does that make sense? You may find you need more or less milk, cream or flour – just add more or less to get your mixture right. If you add more flour make sure to add a little more baking powder. 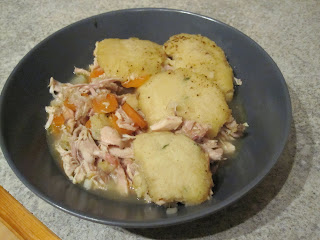 Serve in big bowls and try not to think about the wind and rain outside. I’ve been neglecting the food side of things for a while but fear not, I am back, with more drizzle cakes! 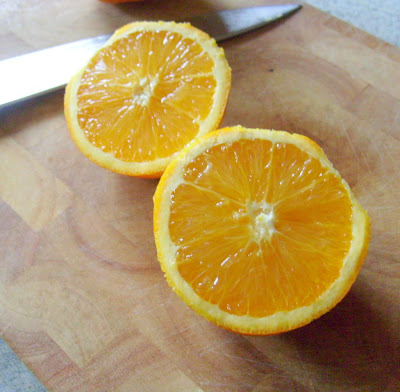 We’ve recently started getting a fruit and veg box from the lovely people at Abel and Cole , in an effort to eat more veg and also maybe because they have a little special offer on 🙂 I’m not a big orange eater, so I was a bit disappointed when we received 4 big oranges in our box (something I forgot to add into my dislikes list) this week, but then my thoughts turned to cake and all was well!

I make lemon drizzle cake a lot, its easy and tasty and I generally have the ingredients in the cupboard/fridge. I’ve been meaning to try orange drizzle cake for a while, its just as easy and just as tasty.

Cream butter and sugar, add the eggs. Zest the orange and mix into bowl with juice of orange. Stir in flour and cinamonn until all combined.

Spoon into a cupcake tray lined with cases. Bake on middle shelf at gas mark 5 for about 10 – 15mins until golden and cooked through.

Normally lemon drizzle cakes require you to wait til the cakes are completely cool to ice them, but I find that you don’t need to so much with cupcakes. Allow them to cool slightly for a few minutes. Mix the sugar in slow with the orange, sifting through a tea strainer to make it nice and fine. I normally use a fork or a whisk so the icing isn’t lumpy. You may need more or less icing sugar than I have said above, depending on the juiceness of your oranges and lemon! Mix until it has a consistency like double cream.

Prick the cupcakes lightly with a fork or small knife. Brush or spoon the icing over the cakes generously.

I was really pleased with how these came out, I may add a little more lemon next time to counter the sweetness and give it a slightly more citrus flavour. This is not very cheffy or even food blogger-y but you could use a tiny bit of from concentrate orange juice to up the orange flavour a little.